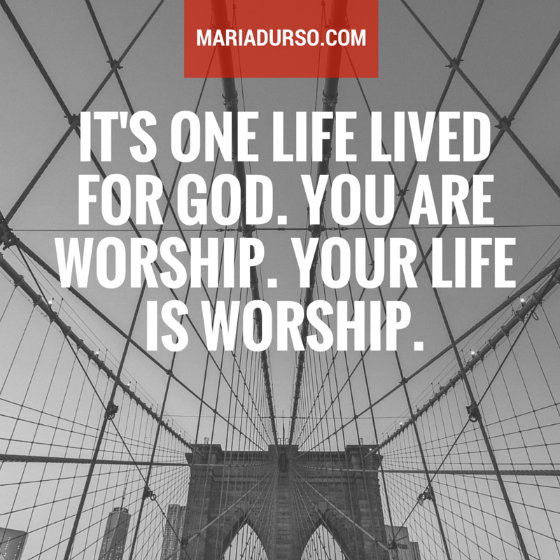 I’m going to start from the New Testament in a very familiar passage of Scripture.

I often times think we read things in the Word, but we don’t grasp the full message of what it really means. This is a very familiar passage that says,

Therefore, I urge you, brothers and sisters, in view of God’s mercy, to offer your bodies as a living sacrifice, holy and pleasing to God—this is your true and proper worship (Romans 12:1, NIV).

This is Paul the Apostle, speaking to the church. He says, “I urge you. I plead with you. I exhort you brothers and sisters.” How many know that God has had new mercies on us every single morning? You can mess up the night before, but when you get up the next morning there’s brand new mercies for you!

Paul says in view of God’s mercy—that’s what’s going to lead you.
His mercies will propel you.

Paul goes on to say that he want us to offer our bodies. When the Apostle Paul speaks about our bodies, he’s not speaking about our physical body only. We read this and think automatically I have to join a ministry. He’s saying offer all of who you are. We must offer all of yourselves—our very being. He wants us to offer our physical body, our emotions, our heart, our mind—all of us as a living sacrifice that is, holy and pleasing.

This is our spiritual act of worship.

Today, a lot of us come from religion where we’re the ones who are supposed to do it and if we do it we get a reward. But see with the first century people ,they knew all about somebody taking their place. Because they understood it so well there were no more need for shed blood. The blood was already shed. There was no more need to kill a lamb. The lamb had already been slain.

This is what they couldn’t understand. When all of a sudden the Apostle Paul said something very foreign to their thinking. He’s telling them now—their life has to become the sacrifice. In view of God’s mercy. More than a yearly trip to the temple. More than mechanical religious duty. Now they’re the anointed priests of God. Often times we hear that we are priests.

You are royal priests, a holy nation, God’s very own possession. As a result, you can show others the goodness of God, for he called you out of the darkness into his wonderful light (1 Peter 2:9, NLT).

Because Jesus Christ was slain, He has made us priests. Male or female has nothing to do with it! We now become priests. The High Priest has now handed us the baton to become priests.

The first century believers don’t understand this. This is about their life. They are the priests. They’re not only the priests, they’re the offering. Jesus Christ was the offering and the priest. Now they became the anointed priests of God, and they also become the offering.

The Apostle Paul is saying in view of God’s mercy, worship takes on a whole new meaning. It’s no longer about going to the temple once a year, or going to the worship service on Sunday. It’s so much more than that. No!

When you’re home in the car with your children. When you’re making love to your husband. When you’re serving in the ministry. When you’re speaking to the coworker. When you’re on the job. Listen! In view of God’s mercy, offer your bodies. Offer every single part of you. There’s no compartmentalized religion any longer.

It’s one life lived for God. You are worship. Your life is worship.

This was invasive to them. Sometimes it’s intrusive to us. God wants every single part of us, and that’s what He expects. This is our whole life, our whole being, burning for God 24/7.

The altar of the burnt offering was front and center.

Men didn’t set the fire. The fire from God came down and set this offering on fire. It was the job of the priest to keep the fire going. They had to add wood every day. They had to bring that unblemished lamb to put it on the altar every single day, but the fire originated with God. It was the basis for every single offering. The fire that God set on this offering became the seed for every other offering to be ignited. In other words, when they needed the fire for the coals for the altar of incense they had to go to the altar of sacrifice because that’s where it originated from.

Remember Nadab and Abihu in Leviticus? The Bible speaks about strange fire. It was because they added fire that did not come from heaven.

Aaron’s sons Nadab and Abihu put coals of fire in their incense burners and sprinkled incense over them. In this way, they disobeyed the Lord by burning before him the wrong kind of fire, different than he had commanded (Leviticus 10:1, NLT).

That’s why a lot of times in the body of Christ, you go places and things are a little strange because men are lighting their own fires.

Now because we’ve been ignited by God, we ignite other people’s lives.

The fire on that burnt offering spoke of two things.

« Faith is a Process
Royalty: No Longer Desolate »