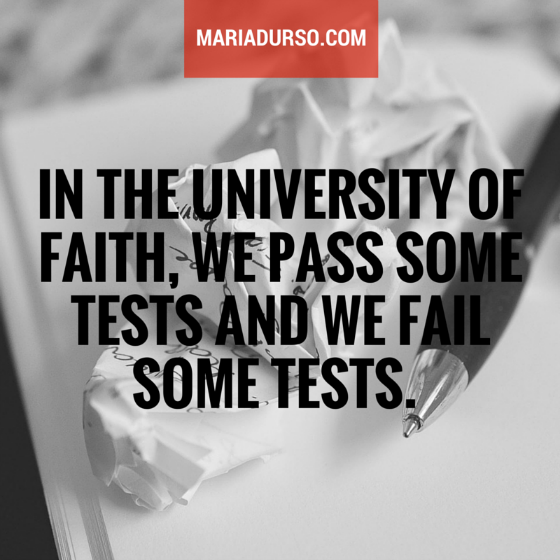 How many know that faith is a process?

Every born again believer has to attend this University of Faith.

It’s a must.
It’s a requirement.
The tuition is free.
It is paid for by the blood of Jesus.

There’s no time limit in the University of Faith. You’ll never be asked to leave!

There are different subject matter in the University of Faith, and this doesn’t matter how many times you have to repeat a course.

By hook or crook you are going to be a graduate!

In the University of Faith, we pass some tests and we fail some tests.

But these tests are only to show us our strengths and our weaknesses. When we fail, which we often times do, we have to be careful of pitfall number one: discouragement. When we fail, from our limited perspective, we believe everybody else is advancing, graduating, and promoting except us.

What we don’t realize is failure is part of the education process. Believe it or not, the University of Faith is different from any other school because the teacher knows us before we even enter into the school. He has factored in every single failure and every single victory before we sit down. Our course is tailor made for us. Nobody goes through the exact same course at the exact same time. It’s tailor made.

It’s in the failing or falling, and in the getting up where our faith is strengthened. Our hope is renewed. We learn about the unconditional love of God. We learn we don’t have to be afraid to get back into the classroom.

To say, “Excuse me teacher, I need your help!”

Did you know there is a bully at the University of Faith?

I want you to say out loud with me, “I am not going to be a drop out. No matter how many times I have to repeat a course. I am not going to leave or be chased out. I am going to receive my Masters of Faith Degree as long as I keep coming back to God.”

Now, if anyone asks you what you are doing with your life—tell them you’re getting your Masters.

Let’s look at the first attendee and graduate to the University of Faith.

Isaiah 51:1-2 says, “Listen to me, you who pursue righteousness and who seek the Lord: Look to the rock from which you were cut and to the quarry from which you were hewn; look to Abraham, your father, and to Sarah, who gave you birth. When I called him he was only one man, and I blessed him and made him many” (NIV).

In Isaiah, we are encouraged as believers to look to the first attendee of the University of Faith because we are cut from the same rock. We are going to look at Abraham, and the first few years of his life. We’re going to see why we are the way we are.

Abraham lived in a pagan world. He wasn’t born into a family of faith. How many of us are not born into a family of faith? I’m not talking about growing up in the church. Going to church does not make you a Christian just like going to McDonald’s doesn’t make you a hamburger. I’m talking about born again believers who love the Lord with their whole heart, mind and strength.

His family might look a lot like your family. There was a form of godliness there, but they worshipped idols. They denied where the real power came from.

I want to tell you why Abraham is the father of our faith. He gets an A+ in trusting in God and His promises. Yes, he was really horrible at following directions. Yes, he was really horrible at sticking to what God told him what to do. But Abraham gets an A+ because every time he messed up, he got back up, and got back to God. He is the father of faith because He has faith in God. He doesn’t have faith in himself or in faith itself. Abraham has faith in God knowing that if he can get back to God, there will always be way for him.

The Lord had said to Abram, “Go from your country, your people and your father’s household to the land I will show you (Genesis 12:1, NIV).

God is telling Abraham that He will show the way. He is the leader. He is in the drivers seat. He wants Abraham to follow Him. Abraham is to no longer do what he wants and expect God to bless it.

Abraham’s going to be blessed by doing what God tells him what to do. We are to do the same. We are to leave our cultural ties. To leave our old mentality. The labels that our family has put on us. The religious affiliations. Who cares what your mom or dad did! When you meet the Lord, you have to do what the Holy Spirit tells you to do.

“I will make you into a great nation, and I will bless you; I will make your name great,  and you will be a blessing. I will bless those who bless you, and whoever curses you I will curse; and all peoples on earth will be blessed through you” (Genesis 12:2-3, NIV).

Nobody blesses like God the Father blesses. And the blessings of God will make up for more than any loss that you will incur.

God says He will identify with Abraham’s offspring. He will bless those who bless Abraham and curse those who curse him. In other words, any cause of yours is a cause of mine. Any fight of yours is a fight of mine. We are children of Abraham.

Harran is the half way point. I give him a B- because Abraham left 98% of the people from Ur of the Chaldeans, but he didn’t leave his father’s household. He gets an F. He didn’t make it to Canaan and settled in Harran. Another F.

Question: What course(s) are you currently enrolled in the University of Faith? How do you think you are doing?

« Is there a fungus among us?
The Altar of Your Heart »