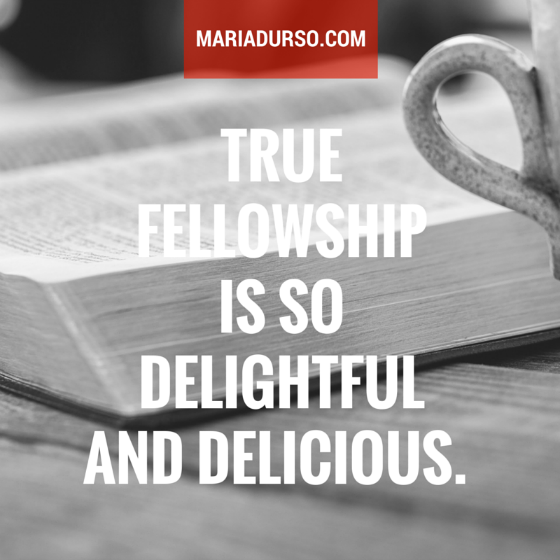 I can tell you what the church’s standard is, but let me make it more personal. Let me tell you what my standard has unfortunately been in past years. Allow me to paint a picture for you.

I am in the middle of hot, passionate worship with the Lord—tears falling, arms swaying—and there I remember that a certain person has been acting differently toward me lately.

I think (in my heart, of course), “I wonder what’s wrong with Sister So-and-So? What’s up with her? Why is she acting so distant and weird toward me? Well, that’s her problem . . . ” All the while I’m singing “I Surrender All” at the top of my lungs.

Ah, there’s the dust ball, all because I didn’t do things according to “code,” or according to God’s Word. I didn’t go and remove it as soon as I realized there was a breach. Instead I did what so many others have been doing for centuries. I swept it under the rug, and it just collected more and more dust in my heart as time went on.

I cohabited the same church building with her, worshipping the same God, but I made sure I never sat on the same side of the church as she did. I also knew which aisle she frequented and what door she exited, so I avoided those areas to steer clear of any drama. Then one day the inevitable happened: our paths crossed.

We immediately acted as though we didn’t see each other and avoided eye contact. I just happened to be with one of my close friends, and it seemed that rug collecting dust balls couldn’t fit another thing under it.

I spurted out something like, “I don’t know why, but I really don’t think she likes me.”

Now someone else became part of a situation that definitely could have been avoided. Of course, my friend told another friend, and the list of people brought into the conflict grew. At that point we had little pockets of division and the beginning of cliques, which is so opposite of what God’s will is for His people.

Doesn’t it say in Psalm 133 that where there is unity, that’s where the Lord’s blessing is?

Doesn’t it say how good and pleasant it is when we, God’s people, dwell together in unity? Unity in the body of Christ, both the local and universal body of believers, is very precious and should be protected at all costs.

Unity causes the anointing to flow down from heaven onto the congregation. Unity is the catalyst for revival. Unity knits us together so tightly the enemy can’t creep into our midst and destroy our fellowship.

True fellowship is so delightful and delicious. So suffice it to say that disunity doesn’t make for a pleasant visit to the house of the Lord, because God’s presence isn’t as present as it could be.

Could it be that disunity is so jarring, not even the Holy Spirit wants to be around it? Could it be that the one little dust ball left unchecked can snowball and eventually be responsible for the dilution of God’s presence in our midst?

If we treasure the move of the Holy Spirit, then we must be intentional about guarding the unity of the brethren at all costs!

You see, when we do things God’s way, it kills two egos with one stone. Doing things God’s way keeps both parties in check. When we don’t heed God’s Word, we are probably “pride-walking” instead of “power-walking.”

The Bible says in Ephesians 4:3, “Make every effort to keep the unity of the Spirit through the bond of peace.”

Paul calls it an effort, which means it’s not easy. He also states that the Holy Spirit brings the unity, but it’s our responsibility to keep it. We keep it through the bond of peace, or as The Message puts it, we are to be “quick at mending fences”!

We ought to be fanatics about our unity. Next time we find yourself wanting to sweep a dust ball under the rug, let’s ask ourself if we are quick to mend fences?

« Your Heart: A Dirt-Free Zone
Do you need a new beginning? »