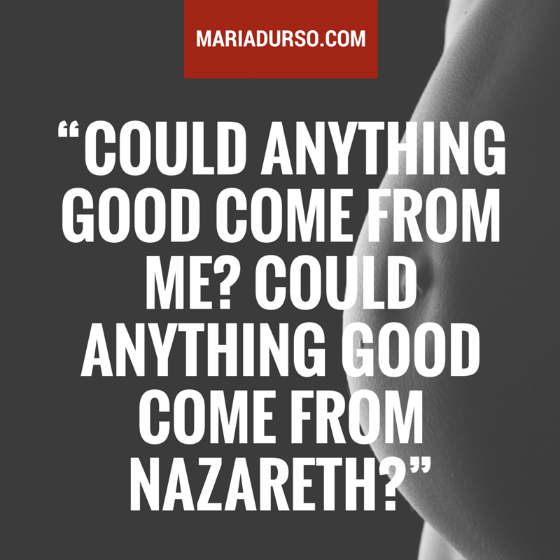 Most of us, for whatever reason, have weird stereotypes or distorted views about who God really is, whom He could possibly use, how He acts or reacts, and what certain concepts in His Word really mean.

Because of these misconceptions, our Christian lives are relatively joyless, and we get bent out of shape trying to accept the very things that are supposed to be blessings. I would like to put a small dent into some of those distortions and take a load off our minds.

Let me start with this example.

Between the Old Testament and the New Testament there is a span of four hundred years. The Book of Malachi doesn’t exactly end on a high note. Man is estranged from God, many priests are corrupt, and the Lord says a “day of fire” is coming. (Remember I blogged about the fire of God last week?)

Then for hundreds of years there is deafening silence.
Man heard nothing from God.
There was no prophet to speak on His behalf.

What do you think He would say? What would His tone be? Would He be disgusted and issue a scathing rebuke? Would He pull out a rap sheet listing all the offenses committed or go on a tirade about how disappointed He is with mankind?

And after all those years, whom do you think He would speak to?

Just when we think we have God all figured out, He defies human logic. When He finally spoke again after four hundred years, He sent a greeting!

If that doesn’t shatter every stereotype we have of God, consider this: not only does He send a greeting, but also He sends it to a “nobody,” according to the who’s who of religious society. That nobody lived in a no-name town—and to top it all off, that nobody was a she!

Let’s absorb this for a moment.

God came to a teenage girl, not a Pharisee, an expert in the Scriptures.

He came to a no-name town, not Jerusalem, where the religious elite lived, and ended four hundred years of hopelessness with a divine visitation in the form of a greeting!

Did you catch that?

The Bible records that an angel visited this young teenager named Mary and told her that not only was she highly favored but also that the Lord was with her!

If an angel swooped into your room and told you that you were not just favored but highly favored and chosen by God to be the mother of the Messiah, what would you think those words meant? What would go through your mind? How would you react?

If I was a young teen engaged to be married to a carpenter and I was told that I was highly favored, my immediate reaction would be to call my fiancé. Let’s think about what Mary’s conversation with Joseph might have been like in the 2014 version of the birth announcement:

[Ring, ring, ring.] Hurry up, Joe, pick up. Hello, Joseph. It’s me, Mary. Listen, according to the angel that swooped into my house . . . Yes, Joe, an angel came right into the room. I saw him with my own two eyes . . . Listen, he said that I was highly favored. So listen up, this is what I’m thinking. Let’s cancel the backyard wedding. I’m booking the wedding at the Jerusalem Hilton. Oh, and by the way, we are going to have a baby! Don’t ask. I’ll explain later. I’ll call the office of Dr. Abraham; he’s the chief obstetrician at Beth Israel Hospital . . . Census? What census? Eighty miles? On a donkey? Donkey? We don’t need no donkey, Joseph. No, just tie that beast back up. I’m sure the angel will be sending a chariot with a driver for us. We are going in style, first class all the way! You’ve got to start thinking big, Joe.

In this day and age somehow the word favored has gotten convoluted even within the body of Christ, and it has caused a separation.

We think there are spiritual “haves” and “have-nots.” The “haves” have it made in the shade. They have sunshine on a cloudy day, and when it’s cold outside, they’ve got the month of May. They drive fancy cars, and have stainless steel appliances and perfect children. They never struggle, they are never sick, they are a size zero, and their husbands go to Tiffany’s to buy them expensive jewelry because they were promoted to CEO of their companies. But that is not even close to the biblical meaning of favor. I think that we might need a brain wash!

Let’s see Mary’s real reaction when she was told that she was highly favored:

Mary was greatly troubled at his words and wondered what kind of greeting this might be (Luke 1:29).

In other words, Mary was skeptical, just as we would be. She must have been thinking, “Me? Highly favored?”

The word translated “troubled” in Luke 1:29 is such a strong and intensive verb, it is not used anywhere else in Scripture. It has the connotation of being greatly agitated or greatly upset.

I’m sure Mary thought just as we would think: Isn’t favor for people with perfect lives?” The greeting didn’t match up with her surroundings or her circumstances.

That’s what people often said about the town—could anything good come from Nazareth? It was a no-name, ghetto, poor town, not like Jerusalem, where the religious elite lived.

So here we clearly see that favor has absolutely nothing to do with location. Mary was pledged to be married to a no-name carpenter. To put it in modern terms, Joseph was a blue-collar worker.

So we also see that favor has nothing to do with vocation!

The angel didn’t say, “Greetings, Mary. You are highly favored because you’re perfect, you never miss the Sabbath, your skirts are always the perfect length, you don’t paint your lips, and you always study the Scriptures.”

If only the angel had said something like that and given her a reason she’d been called highly favored just to take the mystery out of it so Mary could keep on doing whatever she was doing and continue to be favored!

Many times we think favor has something to do with our performance.

But maybe—just maybe—she was favored because God the Father knew beforehand that she would be the perfect mom for the Messiah. Maybe that was it—maybe God knew that His Son, Jesus, would be safe in the arms of Mary. That makes perfect sense to me.

Question: Did you know that God wants to use… you?

« The Fire of God
Your Heart: A Dirt-Free Zone »