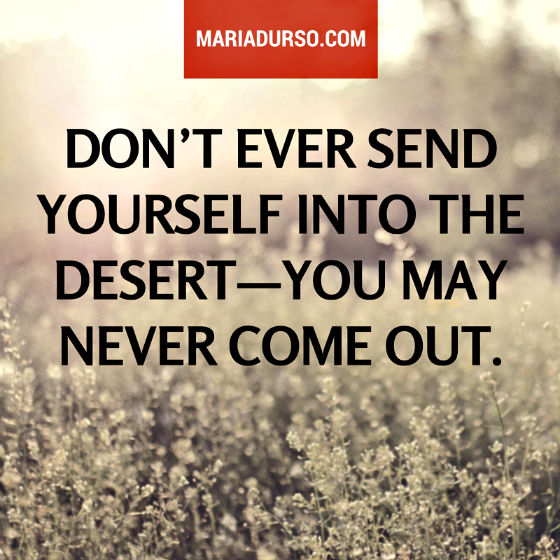 Let’s look at the life of Elijah, the most powerful prophet ever to have lived. Talk about a battle with spiritual depression.

He was a man full of God’s power but also full of weaknesses. He experienced great highs and great lows, just as we do. After the showdown against the 450 prophets of Baal at Mount Carmel, Elijah is fearless. He knows that he plus God is a majority, and he’s confident God will send fire down from heaven and put the false god Baal to shame. Sure enough, God sends down fire from heaven, and Elijah’s sacrifice is consumed even though it is the only one drenched in water. (See 1 Kings 18:16–46.)

Even Ahab is impressed. Finally God sends the rain, and Elijah beats Ahab to Jezreel by outrunning Ahab’s chariot. Elijah is hyped up, ecstatic. Finally the nation of Israel will turn back to the Lord. This is supposed to be the happy ending, the testimony on Sunday morning! These are the things we make movies out of.

This is what will promote the prophet’s ministry and cause it to go global!

But Ahab went home to his wife, Jezebel (v. 46), and the queen wasn’t feeling what the king was feeling. No matter how he tried to explain the move of God in the service the night before, no matter how he tried to express the magnitude of God’s power, she was not moved one iota (1 Kings 19:1). And Jezebel was not one to take defeat lying down. She didn’t care about fire and rain and Elijah the Olympic-caliber runner. She cared about what was done to the reputation of the king, the queen, and Baal—and so pride trumped repentance.

She brazenly threatened Elijah’s life, and Elijah went on the run (v. 2).
Wait a minute.
What?
No way!

Elijah the great prophet, running away from Jezebel? This just cannot be!

But, sad to say, there would be no testimony on Sunday morning, and the nation would remain under the thumb of a despot. Elijah, the man just like us, reached his breaking point. The man just like us hit a brick wall. Aren’t men of God, especially prophets and pastors, able to leap tall buildings in a single bound? Nope. The man just like us is disappointed, discouraged, depressed, and despondent.

Elijah went from faith to fear in a New York minute. The man just like us gave up the fight, and his fire went up in smoke.

If there had been church services the next day, Elijah would have been absent! He left his servant behind and then walked a day’s journey into the desert, alone and isolated.

Don’t ever send yourself into the desert—you may never come out.

It’s a different story if God sends you into the desert, because where He leads you His grace will keep you. Now in the desert we see Elijah praying a different type of prayer. It’s no longer the fiery prayer of faith. No, it’s the pitiful prayer of fear.

He cries out to God, “It is enough! Now, O Lord, take my life, for I am not better than my fathers” (v. 4, mev). This is one exhausted, battle-weary man of God. He actually said, “Take my life, Lord!”

What could possibly have happened? I’ve heard many different sermons on this subject. Some have said that it was “Monday morning blues.” After such a great victory Elijah’s emotions probably plummeted, and he ended up hitting rock bottom. But that doesn’t seem to fit his MO, his modus operandi.

This is what I believe happened: After all was said and done, nothing really changed.

After the brook and the ravens nourished him, after the widow’s flour and oil multiplied, after the showdown at Mount Carmel, after seeing 450 prophets of Baal slaughtered, after outrunning a chariot in the midst of torrential rain—(Wow! Such victory!)—after all was said and done, after three and a half years of sacrifice, dedication, and getting his hopes up that even King Ahab’s heart was starting to turn, Ahab and Jezebel were still Ahab and Jezebel!

I believe Elijah was spiritually depressed.
His heart took a nosedive into the depths of despair.
Disappointment precedes depression.

It’s amazing that God can feed us by a raven and multiply flour and oil, but He won’t change someone’s heart who refuses to yield to the writing on the wall.

And how many times have we been on the precipice of something amazing happening to us, and the rug of success seems to be pulled right from under us?

Just when the smell of victory is right under our very noses, just when we are about to put a stake in the ground to fly the flag of victory, the enemy comes along and snatches it all away in a crushing defeat—and mocks us to boot. All our sweat, tears, dedication, and sacrifice go right down the drain. Our hopes are dashed to the ground.

In the last stretch there’s just no change!
That is a very hard pill to swallow, especially when we are believing God for a breakthrough.

So Elijah, the man just like us, retreated from the desert to the cave of self-pity. The fact that he left his servant behind and walked inside alone was very symbolic. Leaving his servant behind seems to indicate that he was quitting the ministry. He was turning in his prophet’s mantle. He took his name off the letterhead and his plaque off the office door. No more need for an assistant, no more need to have someone go before him to announce his intentions— there wouldn’t be anything to assist.

In the cave he cried out from the depths of his soul, “I have been very zealous for the Lord, Lord of Hosts, for the children of Israel have forsaken Your covenant, thrown down Your altars, and killed Your prophets with the sword, and I alone am left, and they seek to take my life” (1 Kings 19:10, mev). In other words, “I’ve been the only one, Lord, who has stood faithful and fervent. I’m the only one going through this. Nobody knows the trouble I’ve seen.”

Why is this happening to me?

[Tweet “Satan loves when we go into the cave of self-pity.”]

He loves when we isolate ourselves and never ask others to help us pray. As a matter of fact, he’ll even show us the way inside the cave. Thank God the angel showed up and spoke to Elijah’s heart and straightened him out!

The angel says, “What are you doing here? And by the way, Elijah, you are not the only one. There are seven thousand prophets in Israel who have not bowed their knees to Baal.” (See 1 Kings 19:13, 18.)

Think of the catastrophe that would have taken place if Elijah hadn’t listened to the angel. How many times has the Lord sent us His word through an angel dressed in the form of a preacher or teacher, or just a coworker or someone riding on the bus with us, and because we are in such pain and despair, we shut off the spiritual ears of our hearts?

Faith comes by hearing the Word of God (in our hearts; Psalm 119:11 says we hide His Word in our hearts so we won’t sin against Him).

Our hearts must be refreshed by the Word of God daily so the toxins of yesterday find no root in our hearts today. There’s always a way out of the valley, out of the desert, out of the cave!

Don’t allow overwhelming thoughts that cause anxiety to settle in your heart and cause you to spiral down into spiritual depression.

I’ve been in that cave many a time, as I’m sure you may have been or maybe still are. Like you, I’ve been disappointed and wanted to roll up in a ball of despair, shut off the lights, and sleep until my time on earth was at its end. I’ve thought things would have gone a different way and allowed myself to lose heart because of it, only to find out in the end that God’s way really is perfect. My disappointments have not only been God’s appointments; those heavy weights have also given me the muscle of faith that I needed for my future. Although we encounter many valleys, crevices, and steep roads, God always brings us out. He always leads us into triumphant procession, as 2 Corinthians 2:14 declares.