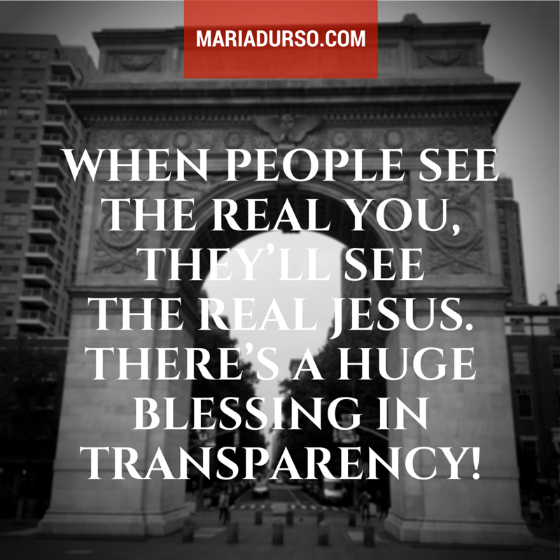 Why do you think the Bible puts everybody’s “stuff” out there?

The good, the bad, and the ugly is exposed and then recycled or repurposed because the anointing to minister is really in yesterday’s sweat and struggle. And let me just say this: the blessing is not only in the pain we have endured, but it’s also in the pain we may have caused.

It’s so easy for us to share our pain from a victim’s standpoint, but how about sharing our own failures and the sin we have repented of while traveling on this long journey of sanctification?

Aren’t we all under construction?
Isn’t this Christian walk a growth process?
Aren’t we being made into Christ’s image and likeness?

As long as we carry the burden or cover it up, it remains a burden, and when we overcome it, at best it’s just a personal victory. But once we take the lid off the trash can of our past, it becomes a blessing for every other struggling saint who sits in the pew.

I always say, “Let your trials pay you dividends—double for our trouble—and bring others much-needed relief.”

The only way for us to do that is to move just eighteen inches to victory. We must be set free from associating our failures with shame, realizing that everybody has failed on some level. Imagine what would happen in the body of Christ if we got honest with one another and stopped allowing ourselves to be trapped in a shroud of pretenses.

As Christians we have short-changed ourselves. We come to church “done” when God wants us “undone.”

When people see the real you, they’ll see the real Jesus. There’s a huge blessing in transparency! People are more ministered to by our weaknesses than by our perfections. Our scars tell the story that people need to hear, so we need to quit hiding them and get them out into the open.

Many years ago the Holy Spirit said these words to me: “Don’t alter the altar.”

Altars used to be made of jagged, unhewn stone (Deut. 27:6, asv). They were put together for one primary purpose: so a sacrifice could be placed on top and lit on fire. The sacrifice was the main attraction, not the altar. But when Israel got fancy, they overlaid their altars with gold. The altars were so impressive that the sacrifice didn’t seem as glorious. That’s what happens when we make ourselves seem better than we really are. We are polished outwardly to perfection, and the One who is the main attraction doesn’t seem as impressive any longer. Even the “greats” have struggled and some have fallen, but they lived to tell about it, and their testimonies give us life.

Jesus told Peter, “Satan has asked to sift all of you as wheat. But I have prayed for you, Simon, that your faith may not fail. And when you have turned back, strengthen your brothers” (Luke 22:31–32, emphasis added). What Jesus was actually saying is: “You’re going to have a blip in your faith, Petey boy. You’re going to fall off the spiritual map for a few—but don’t worry, Pete, I’m praying for you. I’m praying that you won’t give up the fight! And when you return, which you will do, don’t hide it. Push past the pain and the shame. Use your awful failure to encourage others. Allow the Holy Spirit to extract from your horrible experience something substantial to help someone else.”

Maybe that’s why Peter wrote in 1 Peter 5:8, “Be sober-minded; be watchful. Your adversary the devil prowls around like a roaring lion, seeking someone to devour” (esv).

Look at Paul’s frustration with failure and defeat. He tweets about it and Facebooks it.

Really, Paul? Really?
Are you kidding me?

How can you let that cat out of the bag? You, a struggling saint? Better yet—you, a flip-flopping apostle? You’re an apostle who doesn’t do what he wants to do and does what he doesn’t want to do?

But because Paul confesses his mess, God squeezes out a message!

In Romans 8:1 Paul writes, “There is therefore now no condemnation for those who are in Christ Jesus” (mev, emphasis added).

Paul’s pain now becomes my gain. His struggle has been recycled to bring hope to my struggling life! His burden just became a blessing to my heavy heart!

The key to revival is, “Confess it—don’t dress it!”
Now out of the mess we get the message.
Do you get it?

The mouth that got Peter into trouble was the same mouth, now recycled, that preached some of the greatest, most effective sermons ever. Paul, the self-righteous, legalistic murderer who once produced nothing but death, now recycled becomes the greatest messenger of God’s grace and freedom.

Question: Are you covering up any parts of your past, present, and future instead of allowing people to see the real Jesus in you?

« The Heart of The Matter
The Power of Words »